🌿 Our Very Own Liberty Tea 🌿

The Daughters of Liberty

The Daughters of Liberty were a group of women that formed in the North American British colonies in the early days of the American Revolution. Their purpose was created in response to unfair British taxation on certain goods like glass, paints, lead, paper, and TEA. The Sons of Liberty existed with the same purpose as the Daughters of Liberty did, except instead of rioting and protesting, they contributed to the effort by organizing and participating in boycotts that protested things like drinking tea, and produced their own goods after shortages occurred during the separation from British government. 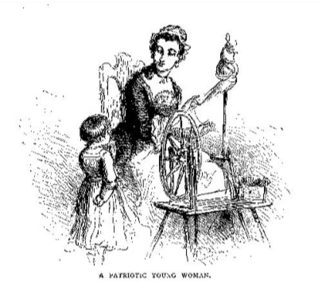 These women were very influential in the success of American independence, because they single handedly cut off heavily taxed supplies from the British, which made British controlled companies like the East India Trading Company suffer serious debt. They simply made their own supplies, including their own tea, which became known as Liberty Tea. Their efforts symbolize resilience, tact, independence and the freedoms we enjoy today.

So What Is Liberty Tea?

In an act of protest, the colonizers threw 342 chests of tea into the Boston Harbor as major act of defiance to British rule and taxation without representation. With imported tea being boycotted against, Daughters of Liberty foraged in their own gardens and orchards for fruits and herbs to be used in a "colonial style" tea. The caffeine-free herbal tea consisted of peppermint leaf, rosehips, spearmint leaf, organic lemongrass, lemon balm, and raspberry leaf.

OBTC'S very own Liberty Tea is our beloved American Wildflower. This herbal blend is refreshing with mint, uplifting with lemongrass, comforting with rooibos, and soothing with chamomile! Drink during the day to soothe the body and mind, or before bed to promote restful sleep and elevate wellness. OUR FAVORITE PEPPERMINTY-FRESH BLENDS FOR THE SEASON: